The latest products and practices to help you bust those bugs.

From biological indicators to sterilization containers, here’s a breakdown of the latest weapons you can add to your bug-busting arsenal as part of a bundled approach for reducing the risk of surgical site infections (SSIs). 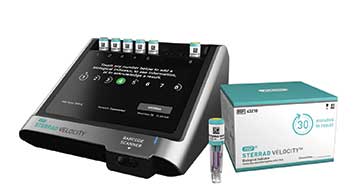 1 Rapid readout technology. There is now a 30-minute biological indicator (BI) for all Sterrad (hydrogen peroxide gas plasma) sterilizers. Until now, the only approved BI couldn’t be read for 24 hours. However, with the Sterrad Velocity, it is now feasible to hold the sterilized load until the BI is read, says Luci Perri, RN, BSN, MSN, MPH, CIC, FAPIC, founder and president of Infection Control Results, based in North Carolina. The BI is compatible with all features of the Sterrad sterilizer, including a touchscreen reader with results that can be sent directly to a computer, she adds. 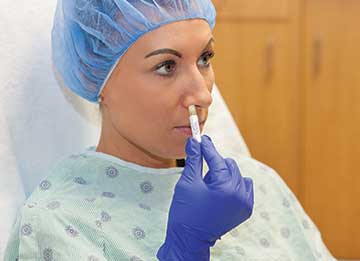 NASAL ANTISEPTICS Nasal decolonization has been used for several high-risk procedures such as cardiothoracic and orthopedic surgeries.

“They’re fast acting, have a persistence that lasts for several hours before having to reapply, and the alcohol-based product has a pleasant citrus aroma,” adds Ms. Segal.

Nasal bacteria are a primary component in the spread of infection. Nasal antiseptics have obviated the need to apply the antibiotic product for 5 to 10 days, which often results in non-compliance and antimicrobial resistance. In addition, nasal antiseptic decolonization is replacing the need to “screen and isolate” patients colonized with multi-drug resistant Staphylococcus aureus such as MRSA, which saves money, time and other resources.

The use of nasal antiseptics before surgery has become a key strategy in the prevention of SSIs as part of the SSI bundle. The SSI bundle includes the use of antiseptic bathing products containing chlorhexidine gluconate. 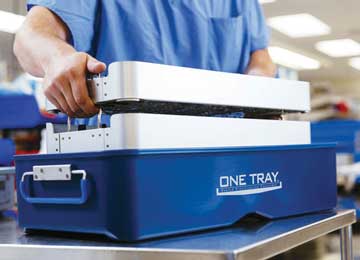 3 Rapid sterilization. Now you can process your vendor trays in a fraction of the time it takes with sterilization wraps and other rigid containers. One Tray, a sealed sterilization container, can terminally sterilize surgical instruments, implants and drills in a prevacuum cycle in less than 20 minutes, rather than 2 hours.

“With the growing demand for faster turnover of surgical procedures, particularly in high-volume situations, reprocessing of medical devices in a timely fashion has been an ongoing challenge,” notes Ms. Segal.

One Tray is ideally suited for high-turnover loaner sets. The containers provide for the safe storage, transport and ensured delivery of the enclosed devices in a sealed container with tamper-evident security and load record documentation. It eliminates the waste associated with the wrapping of surgical instrumentation and orthopedic loaner sets. 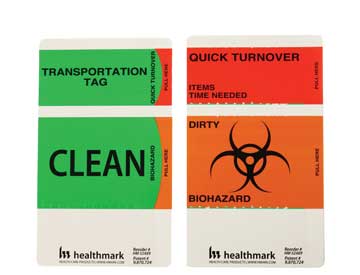 IS THAT CART CLEAN OR DIRTY? The Transportation Identification Tag from Healthmark.

One innovative solution is the Transportation Identification Tag, Healthmark’s 2-part labeling system. The top layer is the “clean” label while the bottom label contains the biohazard symbol labeled “dirty.” When dirty, you simply remove the “clean” label by pulling from left to right. The adhesive backing doesn’t leave residue, so this system won’t increase cart or bin cleaning time, notes Ms. Perri. 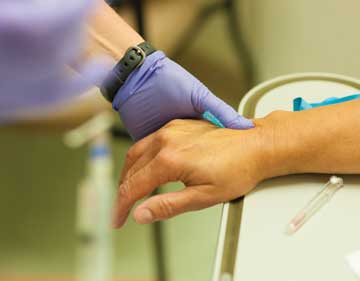 BE AWARE The risk of contamination could be higher than you think during the anesthetization process.

Put yourself at your anesthesia workstation, about to inject a patient with a local anesthetic as she awaits a routine surgery. You reach first to your station for a swab, then back to the patient. Then you go back to your station for a syringe, reach for the vial in one of your drawers, fill the syringe and then back to the patient to inject them with the anesthetic. Every time one of your anesthesia providers make one of those pre-injection steps, every time you touch a drawer on your hard-to-clean workstation for a vial or a syringe or a swab, you’re increasing the risk of contamination. OSM

BOUFFANT VS. SKULL CAP
No Relationship Between Type of Headgear and SSI Rates 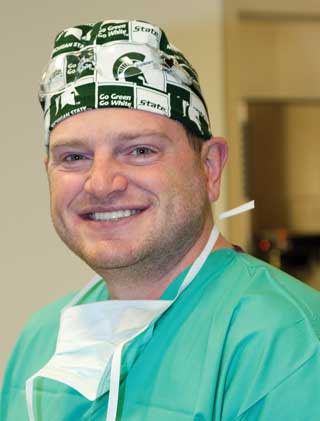 BOUFFANT OR SKULLCAP? Contrary to popular belief, AORN never banned the traditional surgeon skull cap and mandated the use of a bouffant cap.

Skull cap or bouffant? Whichever you prefer, says the 2019 AORN Guideline for Surgical Attire, noting that multiple studies show no significant difference in SSI rates for skullcaps compared to bouffant caps. “No recommendation can be made for the type of head or beard covers worn in the semi-restricted and restricted areas,” reads the guideline (osmag.net/Zyx7KJ), available for public comment until Feb. 22.

Many accused AORN of trying to ban traditional skull caps and force OR personnel to wear bouffant caps a couple years ago. Not true. AORN’s attire guideline stated that perioperative personnel should cover their head and ears in the OR, but it didn’t specify the type or style of head covering that should be worn.

Yet some misconstrued “cover scalp, hair and beards” with “but not with a skull cap.” The confusion likely stemmed from AORN’s rebuttal to the American College of Surgeons’s (ACS) 2016 endorsement of skull caps, hailing them as “symbolic of the surgical profession” and saying that it was acceptable for “only a limited amount of hair” on the nape of the neck and “modest sideburns” to be left uncovered by surgeons wearing skull caps.

AORN challenged the ACS’s tacit approval of exposing the nape of the neck and sideburns. AORN also took umbrage with “wearing a particular head covering based on its symbolism,” saying nationwide practice recommendations should be evidence-based. Many mistook that as an indictment against skull caps.

“Several types of evidence exist,” AORN wrote, “that support recommendations that perioperative personnel cover their head and ears in the OR.”

That much hasn’t changed, nor has the answer to the skullcap-or-bouffant question. The type of hair covering is still each perioperative team member’s choice, says AORN, just as it’s always been. So long as you cover scalp, hair and beards when entering the semi-restricted and restricted areas.