The use of deep monitored anesthesia care (MAC) during outpatient surgeries continues to increase, and for good reason. MAC eliminates the need for general anesthesia and is associated with decreased opioid use, reduced postoperative delirium and sore throat, and less pulmonary and cardiac physiologic disruption. From a facility perspective, you're accommodating patient safety and comfort with practical needs like efficient OR use and faster recoveries — and their associated cost savings.

MAC is a continuum from no sedation to depression of consciousness that can progress to general anesthesia and the need for ventilation support (Fig. 1 on opposite page). Propofol is the main drug of choice for MAC because of its favorable pharmacodynamic and pharmacokinetic profiles. Propofol is "fast on" and "fast off—" useful characteristics in maintaining patient comfort and breathing, and efficient patient throughput. Local and regional anesthetics are also often part of the MAC anesthetic mix. This synergistic effect between sedation and analgesia is hard to predict when a combination of medications are co-infused, so an increase in respiratory depression and delayed cognitive function recovery can occur.

Administering deep MAC is like walking a tight rope. Anesthesia providers must ideally maintain spontaneous breathing while preventing the need for ventilation support. Deep MAC is a great tool when properly administered, but it can be one of the most challenging anesthetics to deliver because each patient can respond differently.

Geriatric and certain ethnic populations (Asian Americans, for example) show a decreased threshold to anesthesia due to body composition and function. In general, patients may quickly transition from one level of sedation to another. As a result, anesthesia providers must be able to respond to all depths of anesthesia and have quick access to necessary equipment and supplies when the depth of sedation exceeds expectations.

As outpatient procedures continue to expand, so do the types of patient populations who undergo them. An increasing number of patients who are elderly, obese and who have a history of obstructive sleep apnea are now operated on in ambulatory ORs. For these patients, MAC can help minimize the respiratory and cardiac instability associated with a general anesthetic. However, these same patients are at increased risk of upper airway complications during anesthesia administration, including upper airway obstruction due to reduced muscle tone. In fact, most MAC-related complications result from respiratory events, which occur more often in obese, sleep apneic and elderly populations.

The most common sedation malpractice claim associated with MAC is inadequate oxygenation/ventilation with more than 80% of claims of this nature the result of brain damage or death, according to the American Society of Anesthesiologists' closed claims database. The American Association of Nurse Anesthetists Foundation's closed claims database also reports that respiratory events are the greatest cause of adverse anesthesia outcomes, with MAC identified as a contributing factor to those claims.

As the United States general population continues to grow older and obesity becomes more prevalent, the risk for upper airway complications during anesthesia in these patient groups increases as well. When administering deep MAC, anesthesia providers must be ready to intervene if upper airway obstruction occurs to prevent further morbidity or mortality. 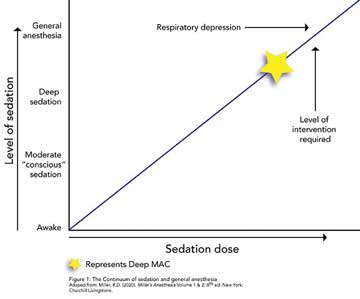 Administering deep MAC requires vigilance and careful titration of anesthetic to maintain a spontaneous breathing airway and prevent apnea. Apnea can be attributed to over-sedation, central or obstructive sleep apnea, or a combination of both. Treating apnea depends on the etiology. To detect and assess apnea in real-time, anesthesia providers observe the patient's respiratory effort and chest movement, look for humidification in the oxygen mask or listen to breath sounds with a precordial stethoscope while assessing ventilation by monitoring ETCO2 waveforms and respiratory rates. Pulse oximetry is also useful for monitoring oxygenation, but is a delayed response in detecting apnea leading to hypoxemia. If the apneic episode is detected early enough, the decline in pulse oximetry can be addressed and minimized.

For apnea caused by over-sedation or nonobstructive central sleep apnea, positive pressure ventilation support maintains oxygen saturations. Obstructive sleep apnea due to upper airway obstruction is treated with airway management tools that open pharyngeal tissue to promote breathing. This is a needed area of improvement as current oral airway devices are not always long enough to stent open the airway. Anesthesia providers sometimes implement workarounds, such as the use of longer, pliable nasal airways via the oral cavity, which may contribute to other issues.

Manual chin lift and jaw thrust maneuvers may also be required to maintain a patent airway. This can lead to post-procedure lingering jaw pain and bruising. These positions occupy providers' hands, often throughout the duration of the procedure. In addition, they require close, prolonged patient-provider contact — a challenge during the COVID-19 era when providers are seeking to reduce potential exposure.

Deep MAC is an extremely effective method of sedation when skilled anesthesia providers armed with the right medications and tools perform it on the right patients. These factors, along with strong clinical judgement and vigilant monitoring, improve post-op patient comfort, avoid the need for general anesthesia and contribute to faster and safer recoveries. OSM