Procedures are shifting to surgery centers, but adding the cases is not for the faint of heart.

Cardiac surgery is the next frontier for same-day surgery. The movement of cardiovascular care from hospitals to freestanding surgery centers is being driven by reimbursement trends, forward-thinking facilities and the steady beat of progress. "Cardiology is another step in providing more surgical care on an outpatient basis for more patients, while saving the healthcare system a significant amount of money," says Bill Prentice, CEO of the Ambulatory Surgery Center Association. The fledging service line is packed with promise — and plenty of questions that need to be answered.

Before 2019, the only procedures for which ASCs could be reimbursed by CMS were implantations of defibrillators and pacemakers — what cardiology pros call "device work." The 17 cardiac-specific ASC codes CMS added for 2019 focused exclusively on diagnostic cardiac catheterization procedures that physicians were already performing in HOPDs. These allowed ASCs to diagnose cardiac issues, but not yet perform "surgery-like" minimally invasive interventions. Six more cardiac ASC codes came online in 2020, this time adding minimally invasive procedures referred to as percutaneous coronary interventions (PCI), specifically placing stents and angioplasty. This year, 11 additional, more complex PCI procedures were added, including lower extremity intravascular lithotripsy and atherectomy.

Mr. Prentice says CMS reimbursement for ASC-approved cardiac procedures needs to increase to drive adoption. "When CMS made the initial move to add cardiac procedures to our reimbursement list, they estimated if just 5% of coronary interventions moved from HOPDs to ASCs, it would save the Medicare program $20 million a year," he says. "If they don't set the reimbursement rate for these procedures correctly, you're not going to see that migration. I think [adoption] is going to be slow and steady. We need reimbursement policies that incentivize ASCs to want to take on this service line."

What are the local regulations?

Although CMS will reimburse for outpatient cardiology procedures, your state's government might not allow ASCs to perform them. "First make sure you're permitted to add the specialty," says Kelly Bemis, RN, BSN, chief clinical officer at Azura Vascular Care and National Cardiovascular Partners, which operates cardiac ASCs across the country. "The regulations are different in each state."

As CMS continues to add codes, states are reacting in turn, says Kenneth Yood, a partner at Los Angeles law firm Sheppard Mullin. "The expansion of services on the federal side is driving an expansion of services on the state licensing side," he says. "California is a great example. Right now, cardiac catheterization services can't be performed in an ASC, but new legislation currently being considered would allow ASCs to provide those kinds of services."

What are the equipment requirements?

It's far from simple or seamless to add a cardiology service line. Ms. Bemis has a unique view of the playing field. National Cardiovascular Partners started in Texas in 2006, long before CMS approved cardiac procedures in ASC settings. However, some commercial payers did provide reimbursement, and combined with Texas' favorable legal and regulatory environment, the company has opened 15 profitable cardiac ASCs.

Most of the firm's ASCs have one or two ORs, referred to as interventional suites. "The walls are lined with lead, due to requiring fluoroscopy throughout procedures," says Ms. Bemis.

The main piece of equipment needed is a permanently fixed C-arm designed for cardiac procedures that mounts to the ceiling or floor. Smaller mobile units used for orthopedic, podiatry and other specialties are not suitable for cardiac procedures. The real difference between a mobile C-arm and a fixed unit is the quality of imaging and the ease of use. As you can imagine, however, to house this large piece of equipment you'll need more space than a traditional OR.

A cardiac operating room is comprised of three spaces: The interventional suite that's large enough for the fixed imaging system, a radiolucent table and ancillary equipment; a second room that houses needed equipment; and a control room where a monitor records what happens during the procedure. "Some ASCs have larger ORs if they're performing more complex orthopedic procedures such as total joints and spine cases, but you basically need the square footage of two traditional ORs to have enough space for the interventional suite, control room and equipment room," says Ms. Bemis.

The required capital equipment — along with an ultrasound machine, micropuncture needles and an assortment of sheaths, guidewires and stents — can cost upwards of $1 million.

You might not need a sterile processing department (SPD), though. "Physicians aren't routinely making incisions for these procedures," says Ms. Bemis, whose centers' supplies are almost exclusively single-use. "For the most part, we have chosen to use disposable instrument trays, which have lowered concerns and risks surrounding infection control. In most of our centers, we didn't build an SPD." For the few reusable instruments and supplies involved, her centers contract with third-party vendors or local hospitals for reprocessing.

What are the staffing requirements? 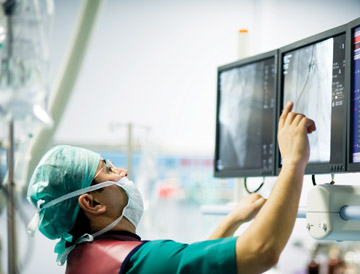 HEARTS AND MINDS Cardiac ORs are highly specialized environments that require collaboration among teams of skilled doctors, nurses and radiologists.

Building a cardiac care team can be challenging. "It's a small pool of qualified providers you're pulling from, with a lot of entities trying to pull from it," says Ms. Bemis, who spent 20 years as an OR nurse. "You need experienced cardiology nurses and a dedicated radiology tech, which most traditional ASCs don't have."

The specialized, collaborative nature of providing cardiac services requires high levels of knowledge, training and experience. As such, it's not the type of discipline you can simply assign to existing staff. "It doesn't really translate," says Ms. Bemis. "You can't cross train OR nurses and make them cardiology nurses. There is an extensive amount of added training required, and you want someone with a good deal of experience."

And, of course, you'll need physicians. "You want to work with committed cardiologists who are willing to bring appropriate outpatient cases to your facility," says Ms. Bemis. Her ASCs attract cardiologists by providing familiar environments that give them confidence they can do their work in an outpatient setting. "We set up our ASCs to look exactly like a cath lab in a hospital — the same emergency equipment, the same supplies," she says. "We wanted to make sure our physicians knew they had everything they needed."

Which model will you use?

For regulatory reasons, starting a cardiac ASC in most states requires choosing one of two less-than-palatable models: co-management or hybrid. Under the co-management model, an ASC contracts with a cardiovascular medical group to develop, implement and manage a program within the facility. Under the hybrid model, an office-based laboratory (OBL) — essentially an office-based version of cath labs found in hospitals — is co-located within the ASC facility.

In the mid-2000s, CMS allowed peripheral artery disease (PAD) procedures, which had been restricted to hospitals, to be performed in doctors' offices, resulting in a significant shift of these procedures to OBLs. Essentially, OBLs can perform and be reimbursed for certain procedures that ASCs can't. "They're two different facilities operating in the same space, but on different days of the week," says Ms. Bemis. "This model allows patients to have access to any of the outpatient procedures in a safe, high-quality and convenient outpatient setting."

Most current discussion is focused on the hybrid model, but it's a highly complex proposition. A hybrid facility must alternate as an OBL or an ASC on different days, or at different times of the same day provided all OBL patients have exited the building before it's used as an ASC. Each must maintain separate tax IDs and National Provider Identification (NPI) numbers, medical records can't be accessed by the other and each bill at different rates for the same procedures. The ASC receives facility fees and only performs CMS-approved procedures, while the OBL receives enhanced professional fees for the physician and the expense of doing the procedure in the OBL.

That's not all: The two entities must remain distinct within the shared space. "In some states, you can operate as co-located providers sharing space at the same time," says Mr. Yood. "Patients for both would walk in the front door and, depending upon the services provided, go to one space or the other. Some states might allow the two providers to share common areas, but not clinical areas."

Rules vary in terms of how patients and staff can physically move between the entities. "It can get as detailed as a requirement that a nurse helping with the provision of cardiac catheterization services has to wear a name badge that indicates the name of the OBL, but if they go to help out in the surgery center, they need to change their name badge so it reflects the name of the ASC," says Mr. Yood. "It's just this whole morass. Maintaining that separation is really hard."

"The opportunity in outpatient cardiology is tremendous," says Ms. Bemis. "We're really in the infancy stages of it migrating from hospitals to ASCs." She suggests starting slowly with diagnostic cases or device work before you can safely and confidently move into interventional procedures.

Ms. Bemis notes the cardiac patient population is typically more vulnerable than most others. "These patients often have more than one comorbidity," she says. "They tend to be older, they likely have blood pressure issues and can even have some peripheral vascular disease or diabetes."

Because freestanding surgery centers often don't have direct access to hospital services, safety measures at cardiac ASCs must be strict. "We're extremely careful," says Ms. Bemis. "Our adverse event rate is less than half of one percent, but we always have emergency equipment available."

Of the new procedures approved by CMS for 2021, National Cardiovascular Partners likely won't perform a few at first. For example, one involves extracting defibrillator leads, which can become heavily lodged after six months due to the creation of scar tissue. "During extraction, severe complications could occur," says Ms. Bemis. "So, we're putting parameters around the procedure. We're very careful and thoughtful about the cases we're willing to do at our centers."

Ms. Bemis is in no hurry to add complex or dangerous procedures. "Looking ahead, as technology advances to make cardiac devices safer and smaller, I believe we'll see structural heart disease procedures and transcatheter aortic valve replacements in the outpatient setting.

"The safety of our patients is our number one concern," she continues. "We're trying to be good stewards of the business, take excellent care of our patients, and focus on the procedures we should and could be doing in an outpatient environment." OSM