The couple minutes you spend applying a nasal antiseptic to joint replacement patients before they undergo surgery is well worth your time. I tested the impact nasal decolonization had on my hospital's hip and knee arthroplasty outcomes and discovered the easy-to-apply method improved an already low SSI rate — and resulted in more than $400,000 in avoided costs associated with treating post-op infections. Before achieving these impressive results, we had to reassess how patients were prepped for procedures and determine the best approach moving forward.

Through periodicals and other infection prevention resources, the infection prevention department at the hospital became aware of several products that were available to reduce the intranasal colonization of methicillin-resistant Staphylococcus aureus (MRSA) and methicillin-sensitive Staphylococcus aureus (MSSA). It has been estimated that MRSA is the responsible pathogen in 63% of SSIs occurring after total joint replacements. We discovered that up to one-third of the population is colonized with MSSA or MRSA on their skin and in their nose, and that it could possibly cause them to have an infection in the site where they have surgery. We also learned that none of the hospitals in our health system were using nasal decolonization as an SSI prevention tool, but the practice was in place at other facilities in our region.

I wanted to keep our hospital in line with the others in the area, so I looked at how Emory University Hospital — one of the top facilities in the Atlanta area — managed their joint replacement patients. Patients scheduled to undergo joint replacements there undergo nasal cultures to test for the presence of MSSA or MRSA and carriers are prescribed mupirocin ointment to treat the nares leading up to surgery. However, our hospital was unable to conduct the nasal cultures — for several reasons. Surgeons indicated they did not want to be responsible for ordering the screenings, and the hospital's lab said they didn't want to process the cultures due to insurance reimbursement concerns. Plus, mupirocin is very expensive; even with insurance, patients pay more than $100 for the treatment. We live and work in a community where people don't have a lot of disposable income, so I looked for a more economical option.

Patients are thankful for the decolonization protocol because it shows we're willing to go the extra mile to keep them safe.

That's when our care team decided to trial the nasal antiseptic, which we selected based on cost, an overall lack of allergy concerns related to alcohol-based products, the simple and easy-to-use applicator, and reported staff and patient preference. The manufacturer of the nasal antiseptic also provided the product free of charge for the first eight months of the trial. Povidone-iodine is another safe nasal decolonization alternative that can protect patients against MRSA. There is some evidence that this agent may also reduce nasal MSSA and MRSA in the nares of surgical patients.

We selected the universal approach of applying the nasal antiseptic to all total hip and knee patients in pre-op. The universal approach is easier to implement. It might prove a little more expensive than targeted decolonization, but it does ensure that no one is missed. During the trial, patients received three ampules of the alcohol-based nasal antiseptic swabbed in each of the nares in the preoperative department one hour prior to surgery, and one ampule twice daily post-operatively for several days.

BY A NOSE Treating the nares and nostrils with povidone-iodine eliminates growing concerns of mupirocin resistance.

Povidone-iodine is viable alternative to mupirocin for nasal decolonization because it has potent and rapid activity against Staphylococcus aureus. It's also an effective nasal decolonization method for preventing surgical site infections in patients who undergo orthopedic procedures, according to a study published in the American Journal of Infection Control (osmag.net/vPpDP9). Researchers applied 10% povidone-iodine to the circumference of patients' nostrils and anterior nares. The application resulted in a statistically significant reduction in average methicillin-resistant Staphylococcus aureus (MRSA) one and six hours after application, but not 12 or 24 hours later, which suggests a single preoperative nasal application of povidone-iodine suppresses S. aureus long enough during surgery to prevent surgical site infections and is a more cost-effective option than a five-day treatment of mupirocin. Additionally, note the researchers, concerns about strains of S. aureus becoming resistant to mupirocin highlight another potential benefit of using povidone-iodine as a nasal decolonization agent.

Our SSI rate was already extremely low before conducting the trial due to the implementation of other infection prevention protocols, including CHG bathing in the days leading up to surgery, pre- and post-operative teaching on how to care for the surgical wound and requiring infection preventionists to report SSI rates directly to the surgeons. However, we were thrilled with the results: The new nasal decolonization protocol resulted in a reduction in the total knee SSI rate from 0.36 to 0.00 per 100 procedures. We had similar results with total hip arthroplasties, lowering the SSI rate from 0.91 to 0.00 per 100 cases. The average incidence of SSIs after total joint arthroplasty is 2% to 2.4% and the average cost associated with a postoperative prosthetic joint infection has been estimated to exceed $100,000. The results of our study equate to the prevention of four total joint infections every year, an estimated associated total cost avoidance of more than $400,000 annually. The reduction in cost to our facility was greater than anticipated. Treating joint infections is a significant expense for the hospital, and it's serious issue for patients, because it delays their ability to return to life routines or work, not to mention the pain caused by the infection and the inconvenience of a revision surgery. 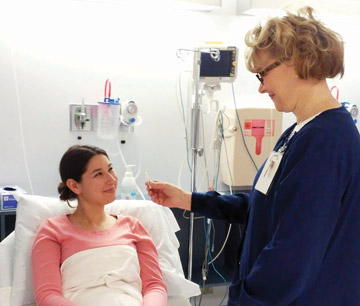 During the trial, the hospital's infection prevention team sent recurring emails and held regular in-person meetings to discuss the trial's progress. The team provided monthly written updates via email to the staff and at the end of the trial, emailed an online survey to team members to gauge their thoughts of the results. Over 90% of respondents were satisfied with the ease of use of the alcohol-based nasal antiseptic and said they would recommend it to colleagues in other departments and hospitals within the health system. Overall, staff members reported that the antiseptic was easy to apply and took little time to administer. As a result, my hospital decided to implement a standing order for preoperative application of the nasal antiseptic instead of requiring and relying on individual surgeon orders.

An unanticipated and encouraging benefit that we discovered after standardizing the use of the nasal antiseptic was the appreciation patients expressed about our proactive approach to infection prevention. They're thankful for the decolonization protocol because it shows that we're willing to go the extra mile to keep them safe. Identifying ways to save money while also improving patient safety and satisfaction are significant benefits worth exploring. OSM