Ensuring OR floors remains clean and clear will keep staff - and patients - safe.

Rob Taylor, RN, BS, IP, was about halfway through his very first day on the job as the clinical director of the Constitution Surgery Center in Waterford, Conn., when he was suddenly called into the OR for something that wasn't listed on his admittedly mundane onboarding itinerary. "One of our surgical techs slipped on a wet spot on the floor and broke her hip and elbow," says Mr. Taylor. "It was not only my first day, it was the tech's third shift at our center." Hit the ground running was more than a figure of speech in Mr. Taylor's case.

After ensuring the injured tech received proper medical care and filling out a mountain of paperwork, Mr. Taylor and his OR team conducted a root cause analysis to find out what went wrong and, more importantly, what they could do to prevent something similar from happening again. "The initial analysis led to some immediate changes," says Mr. Taylor. "We noticed the mops we used left behind more fluid on the floor than we'd like, so we purchased different mop heads."

Of course, addressing slip and trip risks shouldn't wait until you're called to help an injured staff member. You need to spot — and address — potential problems before they become major incidents.

Everything in its place

Have you ever successfully navigated across multiple rooms of your house in total darkness without so much as grazing into something because you know the overall layout like the back of your hand? With the proper setup, that type of awareness can (and should) take place in the OR. "Whenever I was circulating, I always tried to set up cases the exact same way," says Amy Brunson, MSN, RN, CNOR, nurse manager at Baylor Scott & White Medical Center in Temple, Texas. "That way, my team knew exactly where equipment was going to be positioned every time, and staff weren't tripping over something because it was set up a bit differently."

For Ms. Brunson, that setup included strategically positioning all of the equipment at the bottom of the bed with all the cords veering off in the same direction — ideally an area where the staff traffic is going to be limited.

There are several safety benefits to the newer integrated systems, including slip-and-trip protection. "The equipment is all hanging from booms that can be plugged into directly," says Ms. Brunson. "This can limit or even eliminate the cords that you plug into the wall and have all over your OR floor." On top of the cord reduction, the booms also reduce the equipment you need to bring into the OR, making it easier for staff to move freely during cases, she adds.

Even the most meticulously organized and obstacle-free OR leaves staff vulnerable to slips on slick floors. Whether it's from a generous mopping between cases or an overflow of irrigants or bodily fluids during an arthroscopy case, fluids are often an issue in the OR. The amount of fluid produced during notoriously sloppy orthopedic cases is highly variable, depending on the procedure or surgeon involved.

"We have some surgeons who irrigate joints with just one liter during knee and shoulder procedures, and another surgeon who uses 30 liters," says Mr. Taylor.

There are a variety of systems that keep floors dry, from mobile units that collect large volumes of runoff directly from the surgical site to floor-based wicking systems, but high-tech can't replace high-touch in this area. Regardless of whether you're using the latest mobile fluid-collection devices or simply throwing towels or blankets on the floor, a key component of preventing slips in the OR will always center around an alert and team-centered staff.

"Preventing slips is all about awareness," says Mr. Taylor. "It's everyone's job to be aware and look out for each other. If there's irrigation runoff on the floor, someone needs to call that out to ensure everyone is aware before cleaning it up." Cords stretched across floors in high-traffic areas create tripping hazards, and recent regulatory changes have increased the challenge of cord management in the OR. "New Joint Commission regulations require cords to be plugged into a wall instead of a power strip or an extension cord," says Ms. Brunson.

That said, there are still plenty of simple and painless ways to keep cords out of your staff's way. Mr. Taylor organizes equipment cords at the heads of the OR beds, where staff know to look out for them, and always tries to position them away from high-traffic areas. He's also a strong advocate for an inexpensive cure-all. "A nurse's best friend is a roll of tape," he says. "If a cord poses a tripping threat, more often than not we simply tape it down in place."

Ms. Brunson has seen lots of methods used to manage problematic cords, from creative in-house attempts to a variety of commercially made covers that stick to the floor. But, she says, oftentimes something as simple as a durable non-slip mat, like the kind you'd find in a kitchen, is an extremely effective safeguard against falls. Also, the difference between an uneventful procedure and filling out an incident report can come down to stepping back and exercising some common sense — even if the move is a minor inconvenience in the short-term. "Sometimes, it's as simple as unplugging the cord from a high-traffic area and plugging it in somewhere where there's no chance of someone tripping over it," says Ms. Brunson. 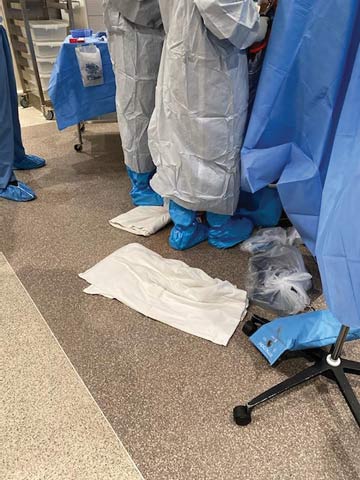 SLIPPERY WHEN WET Using high-tech devices or low-tech solutions to sop fluid off of the floor eliminates a common OR hazard.

You probably never had the dramatic type of firsthand (and first-day) experience with a slip-and-trip incident that Mr. Taylor did. And if you've never had to deal with the effects of such an incident, it's easy to become complacent — especially with the litany of pressing tasks you're asked to handle every day. "You're always laser-focused on patient safety, so it's easy to forget about well-being of your staff," says Mr. Taylor. "But you can't do anything without them."

Obviously, your staff's safety should always be the main reason to keep slip-and-trip prevention top of mind, but there are some other compelling reasons, as well. Slips and falls often cause great damage to high-cost devices, says Mr. Taylor. Constitution Surgery Center performs a high volume of eye cases, which requires a lot of expensive equipment. "If someone slips in the OR and one of our microscopes gets hit, it could cause a lot of damage or wind up getting thrown out of calibration," he says.

Ms. Brunson, who has also dealt with staff slips, corresponding incident reports and employee health follow-ups during her time as a manager, sees slip-and-trip incidents as something that ultimately affects patients. "Many of our staff members are trained for specific surgeries," she says. "If I don't have someone available to work a case because of an injury they sustained, that could impact the quality of the patient care we provide."

In the end, your facility's overall success requires keeping your talented staff upright and working. "It starts with them," says Ms. Brunson. "We need to make sure they're safe so they can safely care for patients." OSM