Retained foreign objects was the most frequently reported adverse event between 2015 and 2017, according to The Joint Commission. We decided to tackle this issue head on by developing a custom count board at our surgery center that could be used in all of our health system's outpatient facilities. Here are the key elements that make it an effective way to keep track of every sponge, needle, burr and blade used during surgery. 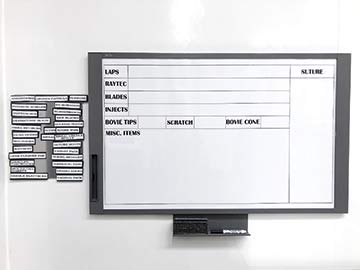 BY THE NUMBERS Staff at Michigan Medicine's newest ambulatory surgery center jumped at the chance to standardize and develop a custom count board.

The custom count boards were so successful in our facility that we introduced them to three other surgery centers in our health system. Thanks to our in-house project, we now have a standardized approach across all facilities for conducting counts and preventing retained objects. OSM