Hospital systems, ambulatory surgery center management companies and private equity firms are in full-tilt ASC acquisition mode these days. The trend is a product of health systems reading the tea leaves and seeing that government and commercial payers are steering more procedures from hospitals to ASCs, where the overhead is lower and surgeries can be done for substantially less money with positive outcomes.

Hospitals want to increase their presence in the ASC market to stop the migration of some of their most profitable surgeries from their outpatient departments to independent surgery centers. Private equity firms see the future profitability of ASCs and want a piece of the action, especially as many physician-owners are nearing retirement and looking to cash out.

These factors have resulted in physician-owned practice groups such as Excelsior Orthopaedics in Amherst, N.Y., receiving calls or emails every week from would-be investors who want to buy into the ASC market. Excelsior won’t budge. In fact, they’re engaged in a $6.2M expansion project, which includes splitting its Buffalo Surgery Center into two buildings, adding four ORs, relocating the facility’s GI suite and adding a sixth procedure room. The group’s leadership is also embarking on launching a division in the practice that would serve as a consultancy for other ASCs that share their core value of remaining independent. “Hospitals figure, ‘If you can’t beat them, join them,’” says Excelsior CEO David Uba, MBA. “But our freedom is what’s most important to us and losing it is our biggest threat. So, we’re resisting.” 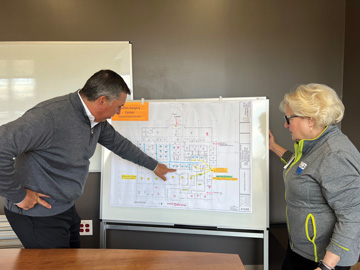 ASCs owned entirely by physician groups decreased by 9% in the last five years, according to the Ambulatory Surgery Center Association (ASCA). Fifty-two percent were owned by physicians last year, compared with 61% in 2017. Physician and corporate (ASC management companies or private-equity groups) partnerships increased by 11%, from 4% in 2017 to 15% last year, according to ASCA. Tri-party ASC ownership deals involving physicians, hospitals and corporations rose by 6%, from 1% in 2017 to 7% last year.

Acquisitions, mergers and multi-party joint ventures are taking place across the country. In December, Tenet Healthcare Corporation and its subsidiary, ASC management company United Surgical Partners International (USPI), spent $1.1 billion to acquire SurgCenter Development’s (SCD) ownership interests in 86 ASCs they hold in joint ventures with physicians’ practices. At the time of the announcement, USPI was offering an additional $250 million to acquire some ownership stakes of the physician groups. USPI and SCD also have plans to build at least 50 de novo ASCs.

Tenet wants to acquire 600 ASCs by the end of 2025, CEO Saum Sutaria said in a presentation at the J.P. Morgan Healthcare Conference in January. When announcing the earlier acquisition of ASCs, former Tenet CEO Ron Rittenmayer said, “This is a transformative transaction within our stated strategy to expand our ambulatory platform. It will enhance our overall business mix and further diversify our earnings profile by accelerating our shift toward lower cost of care, consumer-friendly, faster-growing assets for Tenet, USPI and our physician and health system partners.”

Mr. Uba doesn’t think these types of acquisitions mean the end for freestanding ASCs. He concedes they make sense for some practices around the country that might need a financial infusion and could benefit from the shared-savings programs that large national management companies provide. Excelsior, however, is well positioned in the community, with good relationships with local commercial payers. “I believe we can negotiate better contracts than someone from the outside could come in and do,” says Mr. Uba. “I just don’t buy that you have to add another mouth to feed in order to have the resources needed to grow and survive.”

I just don’t buy that you have to add another mouth to feed in order to have the resources needed to grow and survive.
— David Uba, MBA

The Excelsior group wants to stay independent so it can retain control of how they practice medicine and the culture of their center without outside interference. “We think it’s important for the doctors to be the ones who are rewarded the most, because they’re the ones doing the work and their true motivation really is patient care and patient outcomes,” says Mr. Uba. “Primary profit motives in health care aren’t good for patients and aren’t best for communities.”

Staying independent is also important for ASCs when it comes to sustainability and succession planning, according to Mr. Uba. Excelsior couldn’t get new surgeons to buy stakes of retiring physicians if 51% of the facility’s ownership had been sold to a second party. “That’s counter to the entrepreneurial spirit that drew physicians to develop freestanding ASCs in the first place,” he says.

The consulting service Excelsior is planning to start would be more of a professional collaborative than a management company. Mr. Uba envisions cardiac, urology or GI practices in Western New York coming to the group and asking for help in modeling Excelsior’s success in orthopedics.

“We think we’ll be able to help those practices recruit physicians to the area and help them set up their back-office and administrative functions without needing to partner with an outside entity that will want an ownership stake in their business,” he says. “We’d like to help them build cohesive practice models that include a surgery center and all the ancillary services they require.”

The biggest current trend is private equity physician practice management firms buying stakes in ASCs that are already in joint ventures with hospitals or ASC management companies, according to Jerry J. Sokol, a partner at McDermott, Will & Emery and the global head of the law firm’s healthcare division in Miami. When a third party is added to this type of deal, the management company typically keeps their percentage stake, generally 51%, and the physician practice relinquishes a portion of its ownership.

Mr. Sokol says physician-owned ASCs selling to an ASC management company, which has gone on for years, often makes sense. Small independent ASCs might be better off being part of a larger group that can negotiate better managed-care contracts and get better deals on ancillary services such as MRIs, physical therapy and lab work.

Hospitals want a larger stake in ASCs because they’re witnessing private surgical practices take some of their most profitable procedures from HOPDs, says Mr. Sokol. “Aligning themselves with these physicians and entering into joint ventures with them is the hospital’s way of conceding that 50% of something is better than 100% of nothing,” he adds.

While private equity firms are rolling up many physician practices into larger groups, the majority of surgical practices remain independent, so the acquisitions will continue, says Mr. Sokol. But he doesn’t see the continuing trend as the demise of independent ASCs. In fact, he thinks buying into an ASC that hasn’t been sold to a partner is at least as appealing to a young doctor — even if they’re saddled with a mountain of debt from medical school — than taking an attractive salary offer from a hospital. And it’s certainly a better prospect than joining a practice that is already in a joint venture.

“Physicians who sell to partners essentially sell their future,” says Mr. Sokol. “A young doctor doesn’t want to join a practice that has sold a significant percentage of its profits that are now going to private equity firms, which give part of that as a return to their investors.”

Mr. Sokol says independent ASCs will always exist and continue to proliferate. “It’s just a matter of who will own them,” he adds. 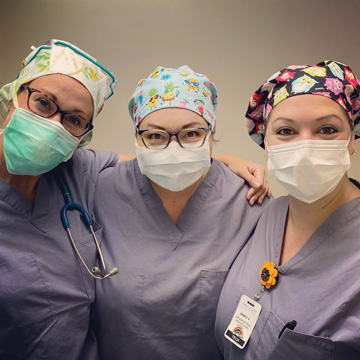 The Ambulatory Care Center in Vineland, N.J., has remained independent under difficult circumstances. “It’s been a challenge for us,” says Administrator Melissa Hermanson, MBA, MSN, RN, NEA-BC, CASC. “We’ve had conversations with private equity firms and the local hospital system, but ultimately have decided to not move in those directions.”

The center is facing lower commercial reimbursement rates each year. The area in which it’s located, roughly 40 miles south of Philadelphia and 40 miles west of Atlantic City, is economically depressed, so a higher percentage of its patients are moving to publicly funded insurance, which decreases reimbursements even more. Medicare cases made up about 20% of the center’s cases five years ago. Today, it’s nearly 40%.

There’s only one health system in the area, and the de facto monopoly allows the system to recruit physicians and, when hired, put restrictive covenants on them, preventing many from using the Ambulatory Care Center. “The government has made it easier in the last few years for procedures to migrate to surgery centers, but when hospitals aren’t giving up the cases to come here, it’s difficult to increase our volume,” says Ms. Hermanson.

She says the center targets “cowboys,” independent physicians who want to grow their own practices without joining a supergroup or working for a hospital, the ones who desire clinical autonomy and have an entrepreneurial streak. “In our location, it’s not always easy to find those guys, but they do exist, although certainly not like they did 20 years ago,” says Ms. Hermanson.

Still, the facility’s last three transfers of ownership shares have been from retiring surgeons to younger physicians. The sales pitch is relatively simple, says Ms. Hermanson, and much of it consists of what ASCs have long been known for: The ability to control your own schedule, choose your staff and work in an ultra-efficient facility that has low rates of infection and high patient satisfaction scores.

The facility’s medical director does a good job of explaining the potential financial benefits of having a stake in the ASC to potential physician-owners, and the facility’s leadership is considering crafting a presentation targeted directly to young residents just starting their careers. These are necessary steps to compete with hospitals that are offering not only high starting salaries, but perks such as breaks on office rent prices and financial bonuses.

Should the Ambulatory Care Center ever decide to sell part of its holdings as part of a joint venture, now wouldn’t be the best time. The combination of COVID-19 and a sluggish economy has the facility still below its pre-pandemic caseload baseline, so its sales value is lower than it was five years ago. If the time to sell ever happens, Ms. Hermanson hopes the partner isn’t a private equity firm. She has heard unflattering stories about formerly independent ASCs that have decreased staff levels after joint ventures as a way to control costs.

“If we ever do have a partner, I hope it’s a group that shares our mission of making patient safety and surgeon and staff satisfaction the primary goals,” she says. “Patients and staff should trust that the decisions we make are for their benefit as well as for the organization. If you don’t have that, and you’re just about making a profit, you’ll lose patients and staff. And then where are you?” OSM