At Eye 35 ASC, process improvement is always top of mind for leadership and staff.

The team at Eye 35 ASC, a fast-paced, high-volume eye surgery center in Schertz, Texas, doesn’t limit their attention to one or two formal patient safety projects every year. Rather, the center’s tight-knit team operates every day with a keen philosophy of continuous, nimble process improvement and standardization when it comes to caring for patients as safely as possible.

“We are consistently investigating and implementing improvements, and gradually tweak things as needed,” says Clinical Director Carson McCafferty, MSN, BSN, RN. “We take a lot of feedback from our staff, and it’s a group process. We’ve learned that patient safety does not occur without effective communication. As a newer facility — we’ve now been open almost five years — we are still trying to improve flow and performance across the board.”

Here are some of the improvements Eye 35 ASC has made to earn this year’s OR Excellence Award for Patient Safety:

• Communication. Key staff wear walkie-talkies to communicate without leaving their assigned department and patients, or to alert anesthesia or the surgeon to report to a certain department. Before a patient exits the OR, a nurse makes a single overhead page throughout the facility that alerts the PACU to an incoming patient and identifies any fall risk, notifies a nurse to begin sedating the surgeon’s next patient and informs pre-op to position the next patient scheduled to enter the OR. 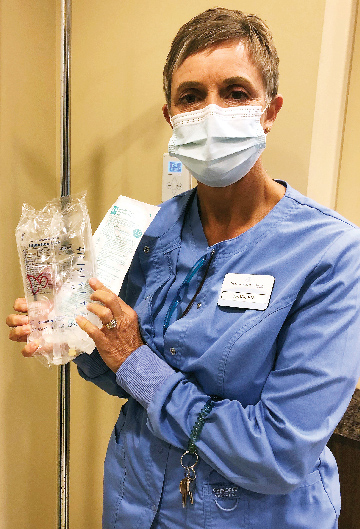 PROACTIVE SOLUTION Terri Herman, RN, holds a bag of dextrose 5% that is used for patients with preoperative blood sugar of 122 mg/dl or below.  |  Newsom Surgery Center of Sebring

Newsom Surgery Center of Sebring (Fla.) is a high-volume ophthalmic facility that runs like a well-oiled machine. That’s no accident thanks to constant behind-the-scenes process improvements that take place at the center, says Nurse Manager Leesa R. Skipper, RN.

One of those process improvements involved the safety of the facility’s many diabetic patients. While nurses in the PACU can easily help a patient with low blood sugar by giving them juice or administering dextrose 5% (D5W) intravenously, the patient still must be held for at least an extra 30 minutes before they are sent home. That unexpected stay can derail the finely tuned high-volume facility. Ms. Skipper and her team realized it would be easier to treat low blood sugar before it becomes a problem than chase it afterward.

Ms. Skipper and the center’s CRNA, Jay Horowitz, reviewed the charts of every cataract patient who reported being diabetic over the previous three months. “We looked at their blood sugar readings before and after surgery to see what the difference between them was,” says Ms. Skipper. They found that 71% of diabetic patients had an average 18% decrease in their blood glucose levels between pre- and post-op. “From there, we determined what we wanted patients’ blood sugar levels to be preoperatively so it would be higher than 100 mg/dL when they were discharged,” says Ms. Skipper.

Mr. Horowitz set 100 mg/dL as the discharge criteria to ensure patients would not suffer side effects, including diabetic coma, after they left the facility. The pair crunched the numbers and determined that a blood glucose level of 122 mg/dL was required preoperatively.

Although staff have always checked every diabetic patient’s blood sugar both pre- and postoperatively, this process improvement added a new component to the protocol. New standing orders were implemented to hang an IV of D5W on all diabetic patients with a blood glucose level of 122 mg/dL or below in pre-op. The anesthetist titrates the IV based on the patient’s blood sugar level.

After two months, Ms. Skipper reviewed the patients’ charts to determine whether the corrective actions had achieved and sustained demonstratable improvement. She was not disappointed. Just one of 76 diabetic patients failed to achieve a blood sugar of 100 mg/dL postoperatively, and that patient’s level was 97, which is in the normal range. They were cleared for discharge by anesthesia. 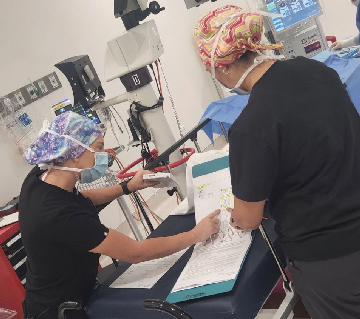 TO BE SURE During a preliminary OR safety check, nurses double-check the lens implant the patient should receive during surgery.

The facility also uses a patient hand-off form, which contains the most pertinent patient information; it is only used between staff and not part of the official medical record. It communicates info such as most recent vital signs, allergies, blood glucose level and fall risk assessment.

• Safety checks. In pre-op, the operative eye is marked only in conjunction with looking at the consent form. A skin marker is placed below the eyebrow to ensure it is visible during the time out in the OR, while a red or green sticker placed above the eyebrow coordinates with the lid color of the eyedrops the patient receives. “A red top is for dilation and a green top is for constriction of the pupil,” says Ms. McCafferty. The nonoperative eye, meanwhile, is covered with a clear plastic shield the patient wears until the surgery is completed. The shield prevents not only wrong-eye surgery — something that has never occurred at the center — but also intraoperative injury.

An identification band with the patient’s name and date of birth is placed on the patient’s ankle because their arms are tucked and covered before the procedure. Stickers are annotated with allergies so when the patient is taken to the OR, techs know to set up appropriately if the patient has a latex allergy. “Name alerts” inform staff about patients that day with lookalike or soundalike names.

As the nurse enters the OR with the patient, an informal time out is performed during which the nurse and tech review the consent, the patient’s ID band, procedure, implant and allergies. In the surgical field, custom medication labels ensure everything is labeled properly. Another formal time out is completed when the surgeon and anesthesia provider are both ready.

• Near misses. “We use a near-miss form to self-identify or report close mistakes that were almost made,” says Ms. McCafferty. “We track this to see if we have trends in certain areas.” The process is nonpunitive and used for educational purposes. For example, staff notes if a wrong lens or implant is pulled — anything where they went through a process and something was not caught that could have been a big deal. “I go back and look at where we are deficient,” says Ms. McCafferty. “We’ve caught and changed the way we do things through this self-reporting process.”

• Tracking post-op issues. Eye 35 ASC tracks infections every month, which given its sterling patient safety record would almost seem a formality if the center weren’t so thorough. “We give the surgeon a list of all their patients going two months back, and they notate if they’ve had any post-op complications or infections,” says Ms. McCafferty. “We’ve not had a single infection since we opened.”

• Emergency preparedness. The center has a rapid response for evacuation and activation of its emergency plan. Red magnetic signs that say “CLEAR” are stationed inside each room’s door frame. In the event of a real fire or a drill, the sign is moved to the outside door frame to indicate no one else is remaining in the room. The signs are in every room, including the restrooms and supply room.

A red box in the nurse’s office serves as Eye 35’s Emergency Preparedness Kit. Designed to be carried for use outside the facility, it contains a binder with all policies regarding possible disasters, staff emergency contacts and a list of emergency numbers other than 911 for electric, plumbing, HVAC and more. In case of emergency, role cards with duties for each staff member can be distributed. The box also contains a handheld radio and charging cords for radios and computers.

Staff with ideas to make patients safer are encouraged to suggest ideas whenever they have them. “It’s not a formal process,” says Assistant Clinical Director Karen Dargan, BSN, RN, CNOR. “We work closely with everyone, so it usually comes up in casual conversation.”

Once an idea is investigated and approved, it is immediately imparted to everyone who needs to know. “We send an email to the staff about it, and if it requires training, we conduct lunch-and-learns,” says Ms. McCafferty. “If it’s department-specific, we huddle in the morning. Not everybody handles change the same, so we always tell them, ‘This is why we’re doing it.’”

The tight-knit center, home to about 24 clinical and office staff, is never finished when it comes to patient safety — a testimony to its aggressive commitment to process improvement and efficiency. “We’re trying to work smarter, not harder,” says Ms. McCafferty. “That’s our motto around here.” OSM