Medicare reductions will have downstream consequences for many ASCs — and their older patients.

The $1.7 trillion federal spending package passed by the lame-duck Congress last month includes a 2% reduction in physicians’ pay for Medicare cases, which experts in the same-day surgical industry say will have multiple immediate negative impacts on ASC operations across the country.

The cuts couldn’t come at a worse time. A pandemic, lockdowns, the war in Ukraine and other factors put inflation above 9% just six months ago, and it was around 7% when this issue went to press.

The cost of surgical goods has skyrocketed, as have the salaries for nurses and other healthcare workers — and there are shortages of both. In a normal year, the physician pay reductions would have merely meant making do with less. Now, facilities are being asked to do so when it’s never been more expensive to run a practice.

ASC leaders shouldn’t think they’ve been spared from the wave of cuts by the Centers for Medicare & Medicaid Services (CMS) because the facility fee for ASCs and HOPDs was increased by 3.8% for 2023. Even that won’t keep pace with inflation, according to industry experts who say ASC providers and patients alike will feel the downstream effects of the lower physician reimbursements.

David M. Shapiro, MD, an anesthesiologist from Tallahassee, Fla., says the rate cut is a personal affront to all physicians. “Throughout the pandemic, healthcare providers stepped up in extraordinary ways, living in spare rooms in their houses and not seeing their families in normal ways as they were taking care of people in ICUs and other COVID-rich environments,” says Dr. Shapiro. “To pick this historic moment in time in modern medicine to cut their pay after all they’ve contributed is just really insulting.”

The ultimate impact of the new cuts will be the lack of timely access to care for older patients at the site at which they’d prefer to be treated. “Patients with commercial insurance will call for an appointment and be seen soon thereafter,” says Brian Bizub, CEO at Raleigh (N.C.) Orthopaedic Clinic, which runs two outpatient surgery centers. “Now the potential exists for a Medicare patient to call and wait months. They’ve paid into the system all their lives when they were working and now will be treated as a secondary tier of society because they have Medicare, which is the most unfair part of all of this.”

• Could have been worse. When CMS set the Medicare Physician Fee Schedule in November, it proposed a 4.5% reimbursement decrease, as well as an additional 4% cut via the PAYGO program, which allows extra cuts in order to hold the reins on the amount of the federal deficit. The prospect of a 8.5% cut led more than 100 medical groups to lobby Congress to stop it. In the end, the proposed 4.5% cut was reduced to 2% and the proposed additional PAYGO cut was suspended.

The domino effect starts with what happens with the surgeon.
Cherokee Gonzalez, RN, BSN

In a Dec. 5 letter to Congress asking that the entire 4.5% proposed cut be reversed, the Ambulatory Surgery Center Association and the other groups in the coalition said the need for legislative intervention was desperate until long-term payment models can be instituted by CMS. “Clinicians, many of whom are small business owners, contend with a wide range of shifting economic factors — such as staff salaries, building rent, and purchase of essential technology — when determining their ability to provide care to Medicare beneficiaries,” states the letter. “We cannot overstate the importance of Congress stopping the entirety of the upcoming 4.5% reduction. Anything less will result in an across-the-board cut that will further exacerbate the significant financial hardship clinicians are already facing and undermine Medicare’s ability to deliver on its promises to seniors and future generations.”

Shakeel Ahmed, MD, FACP, FACG, FASGE, CEO of Atlas Surgical Group, one of the largest ambulatory surgical centers and ancillary services networks in the Midwest, says the Medicare funding mechanism for doctors is so flawed that a smaller-than-proposed decrease is somehow considered a victory. “When we make enough noise, they sometimes delay things, maybe even by a couple of years, but they think we are just crying wolf, so they always start with a proposed cut,” says Dr. Ahmed. “What’s lost in the conversation is there’s never an increase, which is what would be needed to keep service as it is. These cuts are making it worse.”

• More than saber-rattling. Dr. Ahmed says he believes the reduction in pay could stop some practices from seeing Medicare patients altogether. Medicare profit margins have always been lower than cases paid for with commercial insurance, but practices were able to make it work by accepting a mix of patients. That’s now more difficult, bordering on the impossible.

Due to increases in hourly rates for nurses, medical assistants and medical goods, the cost of doing business for Dr. Ahmed’s surgery centers have increased from between 10% to 20% since the pandemic. Medicare reimbursements for colonoscopies, ophthalmic procedures, spine and other surgeries per hour can be less than the hourly rate paid to a surgery center staff, he says. “At some point it becomes unsustainable. This isn’t us grandstanding to get more money and then going back to business as usual if we fail,” Dr. Ahmed says. “Many practices have been pushed to the walls and arrived at the point of having to stop taking Medicare.”

Dr. Ahmed notes the irony in the situation. As he sees it: The cost-cutting move would force these Medicare patients to hospitals for care, where CMS would pay reimbursements higher than the ones the freestanding ambulatory
settings would have received.

• Delays and distances. While Mr. Bizub doesn’t see a future of practices no longer seeing Medicare patients, he does see significant changes ahead. For instance, he can see the potential of a rural practice with three offices closing one of them. These practices could have as much as 70% Medicare patients in their payer mix, so even a 2% cut is substantial in an environment in which rent, utilities, salaries and supplies are so expensive.

“Then you’d have patients driving for an hour to see a physician and waiting two to three hours to get in,” says Mr. Bizub.

“We’re heading toward socialized medicine, in which it takes six months to get a rotator cuff repaired and where anything elective can be postponed, or to where we were a couple of decades ago, with patients waiting all day at a walk-in clinic to see a doctor.”

The delays will have real impact on patient care. Hundreds of thousands of potentially life-saving diagnostic colonoscopies were postponed during the COVID lockdowns. And people were afraid to go to hospitals during that time, so they waited until symptoms of cardiac events were serious before they headed to emergency rooms. Cancer was often diagnosed at later stages than before, due to the same fears. “The delay in care these new cuts will produce will create the same sorts of issues for Medicare patients,” says Dr. Ahmed. 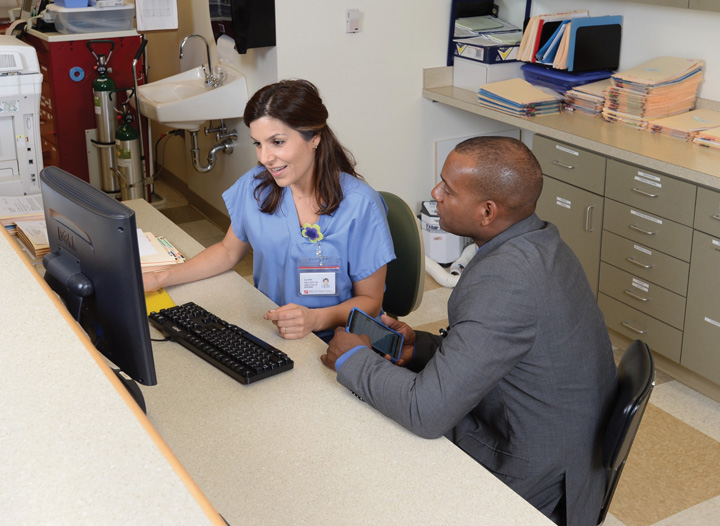 MORE WITH LESS Practices already dealing with increasing staff salaries and supply costs that have doubled now must try to run a profitable business while taking a pay cut to see Medicare patients.

• Prepping patients for surgery. Surgery centers are likely to see operational issues caused by the physicians’ pay cuts, according to Cherokee Gonzalez, RN, BSN, director of Florida Medical Clinic, which operates nearly 50 facilities in the greater Tampa area. “With the surgeons making less money, I anticipate some of the challenges on their end flowing over to our side,” says Ms. Gonzalez. “If they can’t afford the staff to manage all the paperwork, schedule surgeries or get authorizations from insurance companies, we’ll be impacted by that operationally. The domino effect starts with what happens with the surgeon.”

Dr. Shapiro believes the cuts could result in delays in getting patients into surgery-ready shape. Medicare patients often need some combination of cardiac, pulmonary and other medical clearances, as well additional appointments if active steps need to be taken to optimize them for their procedures, a key to achieving successful outcomes.

“Patients don’t just walk in off the street to have surgery,” says Dr. Shapiro. “When someone finds themselves on an operating table, they’ve already had multiple physician visits to treat underlying conditions that precede them actually undergoing a procedure. These cuts will make that harder and they send a clear message to patients that their access to timely care — in any surgical setting — has gotten worse.”

There are also legitimate direct patient-care concerns that industry experts worry about. Short of cutting administrative staff and delaying care, physicians will realize they need to handle more cases to make the same amount of money they earned before the cuts. Perhaps they’ll schedule six cases into a block of time that used to be reserved for four cases. They could do it safely, but if equipment doesn’t get cleaned and rooms don’t get turned over as meticulously as before, a facility’s infection prevention practices could suffer.

Physician practices that currently only work in ASCs might be forced into entrepreneurialism and consider getting equity stakes and ownership in these centers.

This would give them an additional revenue stream from facility fees and the opportunity to capture lost revenue through ASC ownership or even start their own ancillary services enterprises such as imaging centers, says Dr. Ahmed.
He adds that surgeons will need to work harder to determine whether there are CPT codes for procedures that CMS would pay for in ASCs that the doctors don’t currently submit in their claims. Only billing for what you know will be paid for is no longer a luxury practices can employ and continue to be profitable.

In the meantime, Medicare patients could wind up assuming the last position on the priority list of practices struggling to stay solvent. “When Medicare says they’re going to cut your reimbursement by 2%, doctors could reluctantly decrease the amount of Medicare patients that run through their offices by accepting only one Medicare patient for every three new people they see,” says Mr. Bizub. OSM