Robotics, computer navigation and more make a splash in arthroplasty.

Joint replacement surgery has long been a life-changing procedure for patients with debilitating arthritis, but it’s not perfect. Surgeons often see a small percentage of patients whose pain lingers postoperatively, despite implants that seem well positioned.

New advances in joint replacement technology aim to reduce that small percentage even further by alleviating these unseen issues, potentially promising better outcomes and happier patients. “The hope is that this technology will eliminate those outliers to make a good procedure an even better one,” says Kyle J. Hubler, DO, orthopedic surgeon at UPMC in north central Pennsylvania. “It’s an exciting time to be a joint replacement surgeon.”

One of the technologies that’s already making a splash: orthopedic robotic systems. While robots have been commonplace for general surgery for many years now, the technology has been slower to take off in orthopedic ORs. Early versions were bulky and didn’t improve outcomes, but manufacturers seem to have worked out the kinks and the latest systems guarantee more accurate cuts with the potential for better outcomes.

At UPMC Williamsport, Dr. Hubler says the robot has been a great addition to his service line. The robot arrived in August 2022, with UPMC being one of the first institutions in the region to use this particular limited-release orthopedic robot. The system is used for both inpatient and outpatient total knee replacements at the facility, with the goal being less invasive and traumatic surgery with greater precision. That, in turn, encourages less scarring, less pain, less blood loss, and has the potential for fewer complications and a faster recovery.

“Historically, total knees have been a successful procedure for osteoarthritis,” says Dr. Hubler. “But, if there is any kind of technology or technique that could potentially improve patient outcomes out there, then we’ll be interested in exploring that. That was the whole reason for exploring this technology.”

During surgery, the surgeon guides the robotic arm to execute a predetermined surgical plan in the bone preparation and positioning of the implant. The technology allows dynamic positioning of joint implants to match the patient’s unique ligament balance before the first cut is made, which helps surgeons to achieve the exact right position to place them, according to UPMC. This is done through real-time aid to the surgeon via an infrared camera and optical trackers, ensuring a highly accurate and precise knee replacement. “The robotic systems use anatomic landmarks that allow us to have a patient-specific road map, which helps provide a precise amount of bone removal, implant placement and alignment,” says Dr. Hubler. “It gives us real-time data during the operation that allows us to understand soft tissue and anatomy around the knee, and guide the tissue releases, balances and bone cuts.”

At Tower Health’s Reading (Pa.) Hospital in Pennsylvania, which also recently expanded to using a robot for total knee replacements, Stephen Longenecker, MD, medical director of Reading Hospital Joint Care Center, notes that he’s seen a huge benefit to using the robot especially with the “outlier” patients who have atypical anatomy, like larger or smaller legs. “With the robot, I still deliver the same level of care that I have over my 30-year career as a surgeon focused on total joint replacements,” says Dr. Longenecker. “But this makes a big difference with the outliers. If you’re off on a small person, you’re more likely to crack bone or do damage. But the robot won’t be off less than a millimeter. That level of consistent accuracy is a big help.” 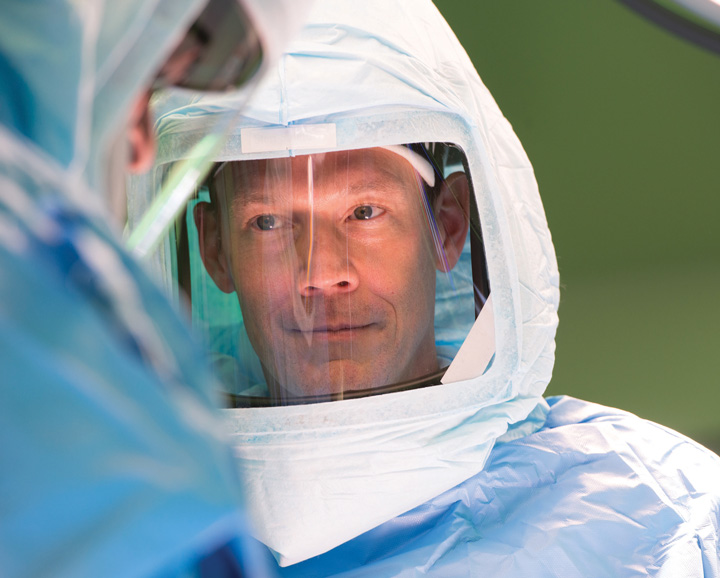 ON THE MARGINS Dr. Stephen Longenecker, medical director at Reading Hospital Joint Care Center, is always open to trying new technology and has seen major benefits in using the robot in “outlier” total joints patients who have atypical anatomy, like larger or smaller legs.

This accuracy is thanks in large part to the robot’s haptic boundaries, which take away the potential for human error and cutting into soft tissue, he adds. “The saw blade will only cut to the boundary of the bone,” says Dr. Longenecker. “Before, I would hold the saw blade and I could feel when it should stop, but with the robot, we can tell it exactly when it needs to stop. That makes it much less invasive to the surrounding soft tissue.”

This improved accuracy also has the extra benefit of helping to take a mental load off a busy surgical team. By removing some of the manual tasks, surgeons can focus on other important aspects of surgery. “If I don’t have to concentrate on the angle or when the blade stops, I can spend that time instead on the retraction or ligament balance,” he says. “We can clear a lot of things off of the table thanks to the robot’s preplanning, and instead we’re able to focus more on the patient at hand.”

With more companies creating their own robotic systems for orthopedic procedures, will the technology be coming to an OR near you anytime soon? That depends, experts say. With a high price tag, additional costs of disposables, a large footprint and still relatively little data on the platforms’ tangible impact on patient outcomes, the technology is still slowly gaining traction in the orthopedic world.

Once a facility does invest time and resources into the robot, there are other considerations as well, according to both Dr. Hubler and Dr. Longenecker. There’s a learning curve to using the new technology, as well as added time to cases, especially when a surgeon is first getting comfortable using the robot. Dr. Longenecker says studies have suggested this acclimation process adds roughly 10 minutes to a case, as well as time spent pre-op in the imaging and preplanning phase.

“I think the challenge is learning the nuances of the technique,” he says. “There’s a navigation program that’s built into this robotic arm technology that gives us real-time data on ligament balance and bony reception, and adjustments that can be made to aid in improving those numbers and improving the alignment.”

According to Dr. Longenecker, that technique takes some repetition to really understand the parameters, and the muscle memory that’s involved in handling the instrument also takes some time, but overall this learning curve isn’t too steep and the process itself is straightforward and familiar. “It’s pretty intuitive,” he says, “We’re still using the same instruments we always have.”

While advances in robotics generally get the most coverage, there are several other innovation areas that could provide more efficient and effective joint replacement procedures to patients.

• Handheld navigation. Handheld navigation technology helps surgeons improve the accuracy of implant alignment without the full robotic system. Developers of these systems note they are the size of a smartphone and often use micro-electromechanical sensors such as gyroscopes and accelerometers to register patient anatomy and provide live navigation of instruments to help surgeons with precise implant placement.

• Smart implants. These implants claim to provide an entirely personalized approach to total knee patients. Surgeons choose a smart implant that best matches their patient’s specific anatomy. On the bottom of the implant, a smart sensor is attached that captures information like a patient’s range of motion, stride length, walking speed and step count, and sends it to an app that their surgeon can also access to monitor the patient’s recovery.

• Anterior approach to hip replacements. Hip patients may benefit from the advanced anterior approach. It’s done from the front of the hip, which causes less damage to surrounding muscle and tissues than the more common posterior (back) approach, says Dr. Longenecker, who does roughly 95% of his hip replacements this way. The technique uses fewer, smaller incisions that allow the patient to recover more quickly and with fewer movement restrictions post-op, he adds.

• Multimodal pain management. A cornerstone of outpatient joint replacements, multimodal pain management protocols have had a large and lasting impact on patient outcomes over the past five to 10 years, says Dr. Hubler. “Nerve blocks, periarticular injections with pain medicine, physical therapy with early mobilization and limited use of narcotics have all been able to help us mobilize and rehab patients faster with less pain and discomfort,” he says. OSM