Advances in technology and technique leave facilities well-equipped to tackle the upcoming surge.

Combine the U.S. Preventive Services Task Force recently lowering the recommended initial colorectal screening age from 50 to 45 with the influx of newly scheduled screenings from patients who postponed their colonoscopies during the height of the pandemic, and you have a phenomenon many are calling the post-COVID colonoscopy boom.

While such a surge may have presented a logistical disaster a few decades ago, new technologies that are currently available can help physicians find polyps more efficiently and allow staff to turn over rooms and equipment faster, so clinics can handle the skyrocketing demand.

Pros and cons of disposables

Disposable endoscopes have proved invaluable for many physicians dealing with increased caseloads. Multiple manufacturers now make fully disposable endoscopes, eliminating the need for reprocessing. There are two basic types of models: one in which the tip of the scope that can carry infection is removed, disposed of and replaced; and another in which the entire endoscope is disposable and can be placed right in a reprocessing bin for recycling.

At first glance, disposable scopes seem like a more costly proposition than their reusable counterparts, but this equipment actually solves many of the problems and less-visible costs inherent in the current process. Disposable scopes eliminate the need for reprocessing, a more costly endeavor than many people realize. For instance, if your endoscopy unit only owns 10 traditional scopes, you need to reprocess them to do more than 10 scopes per day. Reprocessing requires the careful training — not to mention the salary and benefits — of sterile processing staff. It also requires your facility to have a reprocessing room, space that could be used as another treatment room if you are no longer required to reprocess scopes.

Reprocessing traditional scopes also requires keeping costly and hazardous cleaning chemicals on hand, many of which must be carefully handled by staff in full PPE because of the safety risk. Finally, there are the expenses of buying and maintaining the scopes themselves.

When you combine all these factors, there is an argument to be made that disposable scopes may make your service line faster and more efficient. If you can do even a couple extra cases a day during what used to be turnover time, you can more than make up the additional costs of disposables.

Artificial intelligence (AI) is another technology that is improving the overall screening process. While AI will not technically make your service line faster, it does make the procedure more efficient and effective. The software you can buy today from major endoscope manufacturers helps clinicians to quickly identify polyps that are more difficult to locate with the naked eye alone. A major reason the age for colorectal screening dropped by five years is that people are getting cancers at a younger age. Many of these are right-sided cancers that start as flat adenomas. These flat adenomas are easily missed if there is even a tiny bit of stool or mucous capping on them. Missed adenomas present safety gaps whereby patients could develop an interval cancer in the time between their screenings.

Enter AI. The software has “learned” how to identify abnormalities in the mucosal pattern to help clinicians find polyps. Simple polyps are often easy to find, but complex or flat ones can be challenging. The goal of doing the colonoscopy is not to find cancer — it is to detect and remove potentially problematic polyps before patients develop cancer. In addition to screening people earlier, using AI helps us find those hard-to-catch polyps earlier.

The way it works: In real-time, as you are looking at your screen and the image is moving, a little box will pop up to highlight areas where the software has identified a potential polyp.

I am excited about the potential here. Doctors continue to share examples of polyps they missed that would have gone undetected if they were not caught by AI. You can easily look at an area during a routine colonoscopy and see nothing that’s of particular concern, but when the AI lines up and says, “look here,” you will no doubt give it a closer look. You can use narrowband imaging to identify the vascular pattern a little better and then catch the polyp, one you would likely have missed without the technology, much more easily. AI is an amazing technology, and I hope it puts me out of a job someday.

A scope guide is another technology that can make screening more efficient, all but eliminating the need to stop mid-procedure and reschedule a make-up colonoscopy. Having to reschedule the procedure is inefficient for everyone. Worse, when it happens, a certain percentage of patients simply will not come back, which negates the goal of a proper screening. A scope guide essentially draws the shape of the endoscope within the patient and allows clinicians to see where and how the scope is forming a loop. Traditionally, when we had a tough time getting all the way around, we would have to come back and do blind twists and turns — and we might still fail to get around the bend. Because the scope guide shows providers exactly where the loop is forming, they can see exactly which maneuver is needed or if the issue can be solved by a nurse or tech holding a little bit of pressure in one spot to keep the loop from reforming.

Another new device that is bolstering colonoscopy technique essentially locks the endoscope in one position. For instance, if you are doing a procedure on a patient with a “floppy” or “redundant” colon and the scope is forming big loops, this device uses suction to make the scope semi-rigid and greatly reduce the odds of it forming loops.

These technologies may not be needed for every patient, but for more complex cases they can reduce the time to do the procedure while ensuring the effectiveness of the screening. These tools allow clinicians to do more efficient and thorough exams, especially in patients whose anatomy can make for a more difficult colonoscopy. In terms of a learning curve, these new technologies don’t require much in the way of time-intensive training for the doctors or staff within the realm of colonoscopies. They are generally straightforward enough that training can be accomplished over the course of a lunch hour. 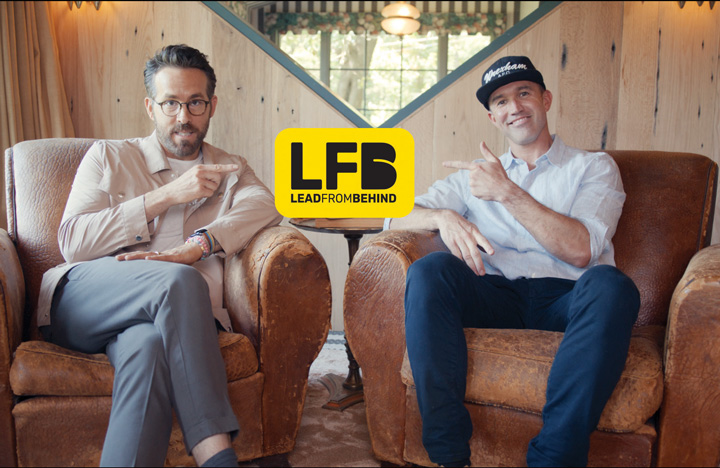 BIG-SCREEN SCREENINGS Ryan Reynolds and Rob McElhenney teamed up with the Colorectal Cancer Alliance to have their colonoscopies filmed and released to the public to raise awareness on the importance of life-saving colorectal cancer screenings.

Ryan Reynolds is best known for Deadpool, countless rom-com movies and viral social media posts, but his fans saw an entirely new side of the actor recently when he agreed to have his first colonoscopy filmed for public release.

A little background: Reynolds, 46, is in the age group now recommended to get their initial colorectal screenings done. Apparently, Reynolds lost a bet with Rob McElhenney, of It’s Always Sunny in Philadelphia, and agreed to a public colonoscopy as a condition of the wager. McElhenney, 45, in turn also agreed to have his colonoscopy filmed to raise awareness for the life-saving capabilities of regular screenings. To Reynolds’ surprise, his doctor found and removed a potentially precancerous polyp during the colonoscopy, and McElhenney had three polyps removed.

To make the project happen, Reynolds’ creative agency, Maximum Effort, teamed up with LEAD FROM BEHIND, an initiative from the Colorectal Cancer Alliance, the largest and oldest colorectal cancer non-profit organization in the U.S., to create a sleek, humorous and well-produced video featuring interviews of Reynolds and McElhenny as well as footage of their colonoscopies. The video was viewed 16 million times. In addition, online booking platform Zocdoc reported a 36% increase in daily colonoscopy bookings after the launch of the Reynolds/McElhenney LEAD FROM BEHIND initiative, social media posts talking about #colonoscopy increased by 244% and Google searches for “colonoscopy” and “colon cancer” rose by 129% and 113%, respectively, according to the Colorectal Cancer Alliance.

Faster procedures will not enable you to perform more colonoscopies if the recovery room stays filled with patients who take a long time to be discharged. Steps taken during the procedure can speed up patient recovery times (and generally improve their experience), so the clinic has the bandwidth to handle more procedures. First, make sure your anesthesiologists are using medications that allow for a quicker “wake-up” time. The most traditional option is to use fentanyl and Versed, which can take a while to wear off and often leave patients feeling groggy. That means you may need more recovery beds or end up delaying additional procedures while you wait for a bed to open.

Switching to anesthetics like propofol can both decrease recovery time for the patients and boost turnover for the facility. Propofol also allows you to have a fairly clear post-procedure discussion with the patient in recovery — one they will remember — just a few minutes after their screening is finished. I have had far fewer cases where I needed to make follow-up calls because the patient couldn’t remember what we discussed. Efficiencies in anesthesia can save you time, even days after the procedure.

Another way to increase recovery room turnover is to use carbon dioxide insufflation rather than room air. True, carbon dioxide will cost more, but because it is absorbed more quickly by the intestinal tract, patients do not have the same feeling of bloating and nausea when they wake up.

There is plenty of literature that shows patients prefer it, and it speeds recovery times. Like disposable scope costs, remember that faster recoveries that allow you to do more procedures per day may very well make up for the extra cost of using carbon dioxide. OSM